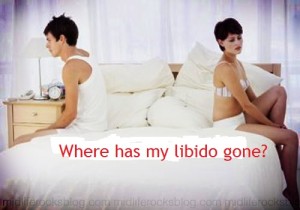 Are you one of those women who’ve secretly – or not so secretly – thought they wouldn’t care if they never had sex again?

The first flush of sexual excitement has been replaced by “sex as obligation.” And you cringe with guilt when you hear the old joke:

Q; What do you give a woman to decrease her interest in sex?

A: A wedding cake.

Australian sex therapist Dr Rosie King suggests low libido is very common amongst women – so much so it should be considered normal rather than “sexual dysfunction.”

The Australian Study of Health and Relationships 2005 publication Doing it Down Under found that on average over 50 per cent of women aged 20 to 59 reported that they lacked interest in sex for at least one month in the previous year.

Low libido especially affected the 30 to 39 age group with 60 per cent saying they had a low desire for sex.

And Dr King – author of Where Did My Libido Go? – says many women expect too much of their libido.

Influenced by the shows like Sex in the City, where the sexually confident Samantha Jones character played by Kim Cattrall describes herself as a “try-sexual” – she’ll try anything once – women expect their sex drive to be as strong as their male partner’s.

They also expect their sex drive should remain at the all time high they experienced in the first flush of romance, without understanding men’s and women’s sexuality differs, says Dr King.

Many of the women Dr King sees had a strong sex drive at the start of their relationship and just do not know where it went or how to get it back.

While it’s so common to be “normal” if you are in a long term relationship low libido will also cause distress, and needs to be addressed, says Dr King.

Just taking the attitude “I don’t want it so he can’t have it” breaks the underlying contract of long term romantic relationships to “meet each other’s emotional, physical and sexual needs.”

“You may find your health is poor, you’ve got relationship problems, or you are living an anti-sex life style, you’re too busy, too stressed to have time for sex. If those issues are addressed you’d probably find your quality of life would improve.”

She suggests a range of strategies including:

Just taking a pill won’t provide instant magic without addressing the underlying issues because for women sex is as much about what is going on in their head as their hormones, but  natural supplements like damiana, tribulus terrestris, and  muira puama,  can give the added boost you need to get “warmed up.”