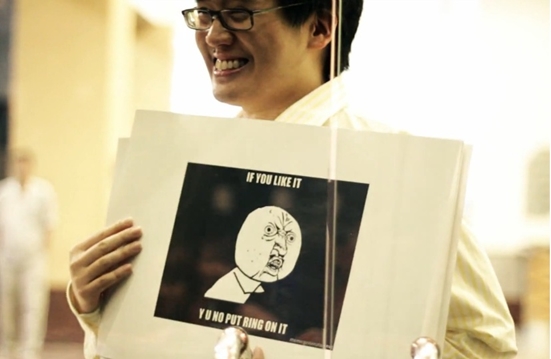 Getting sick of the flood of internet memes? If you were thinking memes were just about the least romantic of humanity’s endeavours, check out Tim Tiah’s video below and think again!

Most people looking for a novel, meaningful and significant way to propose to their girlfriend’s probably wouldn’t conclude that a string of internet memes was the way to go. Then again, most people aren’t Timothy Tiah.

Not only did Tim’s meme-based video proposal win him an enthusiastic yes from his then girlfriend Audrey, Huffington Post awarded it a place in its top 3 most heartfelt wedding news of 2011.

It even had an obligatory cat in it.

See the video for yourself:

Read the full story at his fiancee Audrey’s Blog.