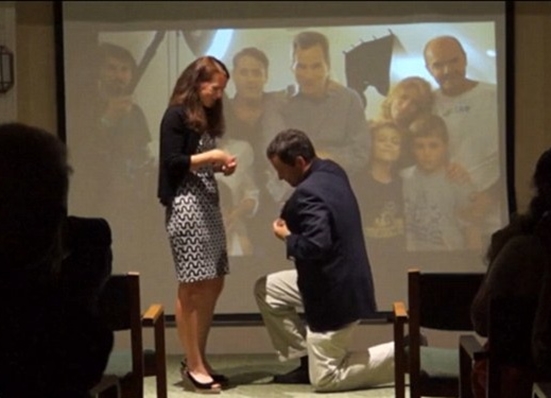 Think a surprise diamond ring in a champagne flute is the apex of romantic wedding proposals?

In that case you’re probably not David Pogue, who not only created a fake film trailer retelling the story of his meeting and falling in love with girlfriend Nicki, but actually convinced a summer resort cinema to screen it before a film the couple were due to watch!

Once the elaborate setup was underway, as the ‘trailer’ came to a climax depicting a knee-bent diamond-ring-offering proposal, the real David headed to the front of the cinema and the lights came back on, and declared in front of the whole cinema:

“’Nicki,  I’ve never met a soul as selfless, as beautiful, as wise and funny as you and I am not going to let you slip through my fingers,’ the real David says, tearing up.

‘My dream is to be with you every day of my life. Nicki, will you marry me?’

And Nicki’s response? She said yes, of course—shouting the answer back with both arms raised to the sky.

What do you think? A dyed-in-the-wool romantic, or an overzealous showman trying to make other men look bad?