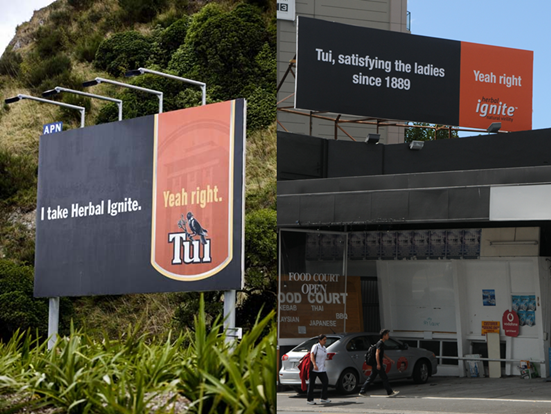 NZ beer brand Tui’s national billboards with their ironic ‘Yeah Right’ punchlines are legendary.  They make it their business to offend, and are guaranteed to get a smile from commuters with a sense of humour.

Some of the more infamous include the politically incorrect “I swear I was OK to drive – Yeah Right”; and “It was consensual – Yeah Right’.  “Camilla for Queen? – Yeah Right” was taken down at police request before Prince Charles’ last visit.

Tui billboards pay homage to a stereotype of the beer guzzling monosyllabic Kiwi bloke who values his mates over his chick.

So when the international brewing giant chose to put male sex pill Herbal Ignite on a sign on the Hutt Motorway out of Wellington it was the brand’s natural territory.

“I take Herbal Ignite – Yeah Right” could be taken as commenting on the reluctance of Tui drinkers to talk about erectile dysfunction – or were they suggesting Tui men don’t have erection problems? Or that women shouldn’t believe Tui men when they promise a strong sexual performance?

Whatever Tui intended, Herbal Ignite marketer Intenza NZ Ltd, thought it opened the way for a “David and Goliath” cheeky billboard campaign of its own to stimulate discussion on the topic of ED. That’s when Herbal Ignite posted billboards in Auckland and Wellington reading “Tui, satisfying the ladies since 1889; Yeah Right, Herbal Ignite”

Given the likelihood many of these same blokes have experienced Brewers Droop – that is seen beer’s tendency to “provoke the desire but take away the performance” (Will Shakespeare noticed)  the people behind Herbal Ignite thought it was a good opportunity to raise the profile of ED as a health issue men can talk about without embarrassment.

After all women have been talking about their intimate biology for fifty years, since the sexual revolution of the 60s, so it’s about time men caught up.