The Heart Attack That Changed Everything

Three and a half years ago Tim McEown was a nearly 50-year-old with a 26-year-old girl friend named Sarah, a life he didn’t much care for, and no way out that he could see.

Then he had a heart attack while he and Sarah were having sex.

As the emergency medics were confirming he’d suffered a myocardial infarction and were asking if he’s taken any erection enhancement medication (he hadn’t) Sarah began packing an overnight bag for his hospital stay.

A Short Stay in Hospital

As he elegantly explains in a New York Times Modern Love column, it was that small bag “packed with our hopes” that changed everything.

Packing the bag was a “small thing  . . . Just a commonplace act that probably would have gone unnoticed under different circumstances.

“As the E.M.T.s asked their awkward questions, Sarah packed a bag of things she thought I would need at the hospital: underwear, my glasses, some books. Enough for a short stay, nothing more.

A Quiet Act of Hope

“My initial reaction to what she was doing was resentment. Why would she want to complicate this? Why couldn’t she just let me go?

“But then I pictured her returning to our apartment alone in the event of my death, carrying that bag of stuff I would never use. And that image stuck with me, and started taking up space in my head.”

That small bag, and the “quiet hope her act spoke to,” was the reason McEown listened to his doctors.

A two packs a day smoker for 30 years, he quit. He moved from the city he’d lived in for most of his life to a place far better suited to his creative work as a writer and film maker. Six months after the heart attack he married Sarah.

And as he writes: “Eventually our sex life came back, too, after a couple of years where it felt as if a ticking bomb were under the bed (which was about as much fun as it sounds).”

Love About More Than Self 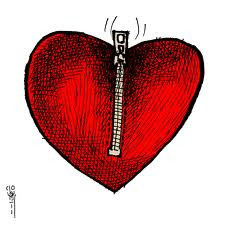 None of it these changes were inevitable, as he explains. He was inclined to be stubborn and contrary, and “plenty of people are smoking through tracheotomy holes as I write this.”

Sarah’s bag packing gesture “exposed my own selfishness, the pettiness of giving up on life just because sometimes life is hard.

“It embarrassed me the way being caught in a lie is embarrassing. Love doesn’t afford us the luxury of caring, or not caring, only about ourselves . . .

“Sarah’s act was an instance of what love looks like, stripped of all the usual bells and whistles. To have the opportunity to witness that, regardless of the circumstances, left me feeling like a fortunate man.”

To read Tim McEown’s column In a Small Bag She Packed All Of Our Hopes see the New York Times Modern Love column June 5, 2014