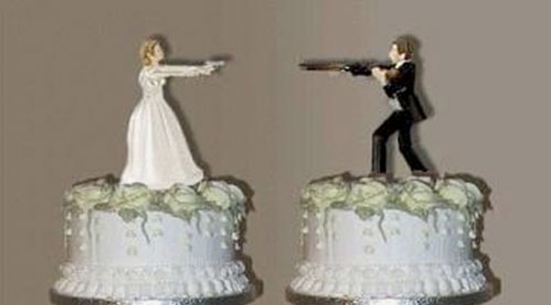 The next time you’re tempted to leave the dishes for another night—again—you might want to think twice! Turns out, it may be a short trip from here to a matrimonial attorney.

Even if you’ve had no experience personally with divorce proceedings, it’s a common enough plot device in books, movies, TV: to justify your grounds for divorce, you must cite some sort of unreasonable behaviour.

But in the subjective realm of human relationships and behaviour, what exactly counts as truly ‘unreasonable’?

And so in the interests of general enlightenment, we’ve compiled a list of ten of the strangest reasons to get divorced!

Slurping. Open-mouthed chewing. Burping. Jaws that click with each chew. Some reader’s hackles are probably going up just reading through this list! 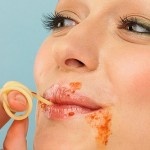 In some countries, this is considered a compliment to the chef. Apparently.

The cure: shut it. Literally. Or another good tip, for those with clicking jaws or other noisemakers uncontrollable, try eating with some nice music playing — or even the TV, if you’re really stuck.

Watch out, if you’re thinking this one’s not really that much of a big deal—you’re probably a major culprit. For some, a clean and tidy home environment is a prerequisite for feeling relaxed and comfortable. No wonder then that coming home after a long hard workday to a sink half-full of dishes can be such a red-flag! Especially when one partner is continually remiss, as this can make you seem indifferent to your partner’s needs. A double black-mark. 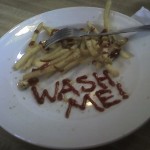 I get the sense something’s being hinted at, but what…

The solution: actually do the dishes. Wipe down the shower/bath tub. Fix that dripping tap. For the sake of a happy, peaceful household, it’s more than worth the effort in the long run.

This one should be fairly self-explanatory. No one particularly appreciates persistent niggling over minor driving decisions. The irony here is that few people loathe ‘Backseat Driving’ as much as those who tend to be the worst offenders!

The fix: Consider keeping your two-cents out of it. Unless, you know, an actual danger or accident is imminent, of course.

Again, if you’re not familiar with this one, chances are good you’re it. Most of us prefer to let the actors and action on-screen do the explaining — no matter how fascinating/hilarious you might think your input is. After half a movie it starts to get pretty irritating pretty quickly.

And the same goes for asking questions about what’s going on too. We’re all watching the same thing. We don’t know anything you don’t.

The solution: keep the questions and commentary to an acceptable minimum. If you’re not sure what this is, just ask! Your significant other will doubtless be more than happy to oblige.

Got stuck in the trap of thinking time spent on the couch watching TV together counts as quality bonding time?

Plus, hours of couch slouching won’t do much for your physique, energy levels, romantic spontaneity… or anything else, really. 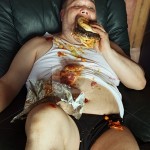 But everything I need is right here!

The fix: do yourself (and your partner) a favour. Get up. Go out. Get active.

The only thing worse than accidentally putting your non-colourfast jeans in the wash with white towels?

Having someone come around after the fact and say: “Oooh, you shouldn’t have done that! You should always separate those things beforehand!”

Gee. Thanks for that.

Unsolicited advice re: the blindingly obvious can get up anyone’s nose, but when the source is your spouse and this sort of thing comes in day in day out… well. Enough said.

The solution: This is very similar to the backseat driver issue. Express your opinion judiciously, effectively. Compassionately, wherever possible. No one likes to be harangued. Especially not about what’s painfully obvious to anyone with two brains cells to rub together.

7. Burping or Flatulence – without saying excuse me.

Regardless of which end this comes out of, it’s obnoxious enough as is, let alone when the offending party seems disinclined to even apologise.

For some, it’s a mild faux pas. For others, it’s disgusting and brazenly disrespectful of others in your presence.

The cure: Don’t. Or muffle it. Or failing that, make some effort to apologise and look embarrassed! 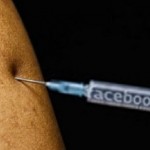 But I’m just a social user

As innocuous as it may seem when you’ve got a few minutes to kill, when one partners spends hours each evening facebooking, ignoring their spouse, it can quickly cause resentment and serious relationship problems.

The fix: agree together on facebook limits. Different times of the day, especially evenings, may suit stricter or more lenient limits.

9. Discovering you’re gay. After getting married.

According to divorce lawyers, this one’s not just daytime soap opera fodder: it’s actually more common than you might think.

The solution? Well… perhaps if you’re ‘not sure’, it might be worthwhile to try the other sex in advance, maybe before committing to a lifelong attachment? Just maybe?

As unbelievable as it sounds, divorce lawyers report an ever-increasing number of couples calling it quits and citing boredom as the major issue.

The fix? No relationship can be all thrills and spills, all day every day. If both partners are bored, but this wasn’t always the case, you might just need to put more effort in finding new ways to have fun. Break the usual habits, the humdrum day-in day-out routines. Try something a little unusual or daring. Or maybe even just get out the house more often!

What’s the craziest reason for divorce you’ve heard of?