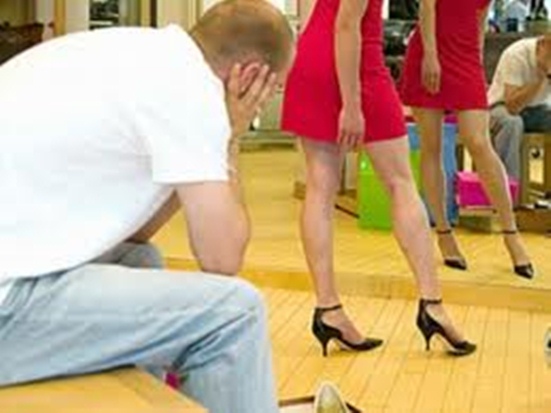 New research suggests men’s aversion to shopping may be justified however. Professor Frank Sommer, a Berlin-based Urologist, claims too much shopping may actually make men impotent.

So: how could shopping make men impotent, exactly?

In a nutshell, the more retail purchases per hour, the higher the risk.

BPA is a known endocrine disrupter. It interferes with the release of hormones, and in men can shift hormone production towards oestrogen, resulting in the low libido, increase in fat and decrease in muscle, and reduced erectile function often seen in men with low testosterone levels.

Three US states and Canada have already moved to ban BPA outright, with the chemical also linked to breast cancer, heart disease, obesity, hyperactivity and other general undesirables.

Meaning men elsewhere have a legitimate excuse for avoiding being dragged along on extended shopping trips. For now. Although on the other hand, endless window shopping should of course be perfectly safe…

What’s Your Opinion? Does the hormone-altering BPA really mean shopping poses men a risk of erectile dysfunction? Or is Professor Sommer merely found a cunning way to avoid his least favourite activity? Should BPA be universally banned? Let us know your thoughts!