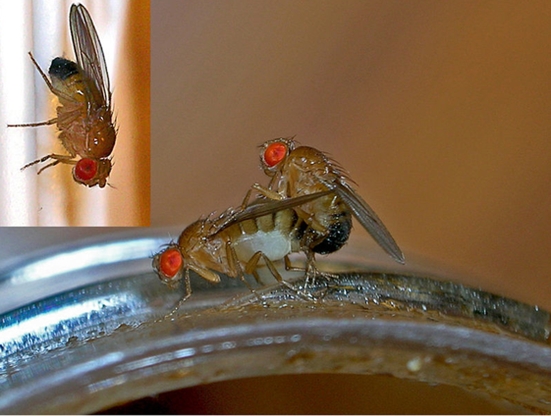 Ever drowned your sorrows in a drink after having your advances rejected?

Well, you’re not the only one – though you might not appreciate the company:

Turns out sexually frustrated fruit flies do the same.

In new research published by Science Magazine, eager-to-mate male fruit flies were placed in a container with a sexually-sated female fruit fly. So satiated she really had absolutely no interest in any mating with anything anytime soon. She would kick the amorous males, batter them with her egg laying organ. Even the fruit fly equivalents of George Clooney had no show. 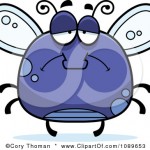 These would-be Casanovas were put through three hours of this rejection every day for four days straight – enough to puncture any male ego!

Meanwhile in other containers, luckier males were given access to a veritable harem of virgin female fruit flies.

Both groups of flies were then given access to food, both plain and alcoholic.

The results: the sex-starved fruit flies showed a significantly higher preference for the alcoholic option. In other words, they got completely sloshed.

When the same spurned fruit flies were later given opportunities to successfully mate however, their thirst for the drink fell dramatically.

Researchers attributed the difference between the flies to levels of a brain chemical called Neuropeptide Y. The flies that mated more and were less likely to drink were found to have much higher levels of the chemical. Further experiments that directly manipulated levels of Neuropetide Y in the flies seemed to confirm the link.

In humans Neuropeptide Y levels are already associated with addiction, eating, anxiety and mood disorders. It seems the results of Science Magazine’s research may have big implications for our understanding of addictive behaviours in people.

What do you think? Can one brain chemical really have such a big impact on our behaviour? Did we really need fruit flies to give us another excuse to enjoy an active sex life?