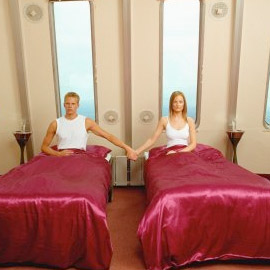 Best selling novelist Jilly Cooper has the answer to a harmonious Christmas – and it’s got nothing to do with being polite to the in-laws.

As she told the Daily Telegraph it’s much more practical: a television in every room, so that everybody can escape all the enforced togetherness now and then and watch what they want.”

Marriage, and what keeps people together, is at the forefront of Jilly’s mind, with the reissue of her 1969 book How to Stay Married – a humorous romp through married life, sex, rows, DIY and affaires.

In October the Coopers celebrated 50 years together, surviving infertility, his infidelity and his battle with Parkinson’s, a disease that has left him largely wheelchair-bound and the two of them with a small battalion of cheerful carers (they make life bearable, she says).

She’s admitted she “had a fling” herself in the first decade of her marriage – Leo welcomed her back with open arms – and then suffered publicly in the 90s when Leo’s mistress of six years announced she was having an affair with him “to defend the rights of the other woman.”

As a newlywed, Jilly wrote a breezy column about their lives in a Saturday supplement. It was brilliantly subversive: making love all night, sloping off to parties, flirting with other men and ruining shirts. “Oh, everything was jazzed up a bit,” she says. “But I loved the Sixties.”

You Stay Because You Love Someone

As Jojo Moyes quotes her saying in the Telegraph “Nobody in the Sixties were angels. We were all quite wild, so these images of a darling, loving wife . .. But you stay married because you love somebody. I didn’t want to go anywhere. Where would I take the dogs?”

How to Stay Married’s basic premise is that a marriage stays happy if a man has a wife who is cheerful, sexually enthusiastic, and cooks.

She wonders if there is “something in the water” to explain women’s shrinking libidos. “People aren’t trying so hard. More marriages are breaking.”

As for couples sleeping in separate bedrooms. “Oh, one mustn’t!” she shudders.

On her ruby wedding anniversary, 40 years, she described it as “two people rowing across a vast ocean in a little boat, sometimes revelling in blue skies and lovely sunsets, sometimes rocked by storms so violent we’d nearly capsized”.

Do you agree with Jilly’s suggestions for a happy marriage? Have you “forgiven and forgot” a partner’s affair?  We’d love to hear your thoughts on a topic that touches everyone if they live long enough.

Leave a comment being happily married, having an affair, how to stay married, infidelity, Jilly Cooper, Leo Cooper, staying marriage