However new research from Proceedings of the National Academy of Sciences may provide one piece of the puzzle: it seems that male sex hormones, in particular testosterone, surge in volume post-exercise.

This testosterone spike is now believed to be key in exercise-stimulated new brain growth, otherwise known as neurogenesis: the growth of new neurons (brain cells) and synapses (connections between neurons).

Which was unfortunate news for these particular male rats! The test group were all castrated, and then the controls underwent a similar procedure that left their testes intact, to remove surgical trauma as a confounding factor.

As if that wasn’t enough, many of the rats were then forced to endure two weeks of jogging on a treadmill. 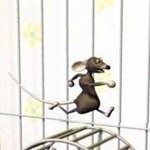 The rest were given a programme of fortnight of compulsory sedentary behaviour, of which the second group naturally complained very bitterly.

The scientists then compared the levels of DHT, a testosterone variant, in the rat’s brains. They found the jogging rats had significantly higher levels of neural DHT than their relaxed brethren, even those castrated.

This is some of the strongest evidence acquired yet of the potent effects of exercise on neural testosterone levels, and thus neurogenesis.

Interestingly enough, it seems one of the reasons earlier experiments tended to focus on female rats and oestrogen effects, is that female rats were more willing to exercise than males – and the difference only increased with age!

Perhaps there’s a sneaky commentary on human life there, too: while men are increasingly likely throw in the towel as they age, women keep on running—and reap the mental health benefits as a result!

What’s Your Opinion? Yet another good reason to maintain regular exercise habits? Or just not convinced? And if the latter, are you male or female?