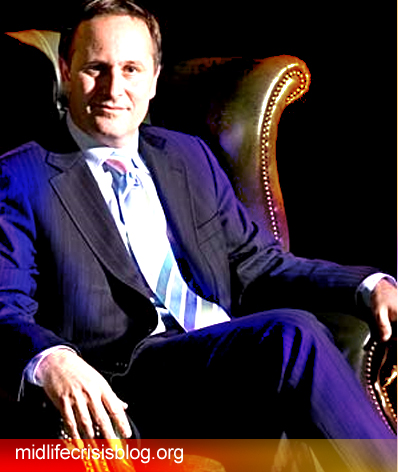 NZ Prime Minister John Key has become the latest high profile man to make headlines by publicly acknowledging he’s had a vasectomy – or at least if he hadn’t – like George Clooney – he was thinking about it.

George Clooney is quoted as saying that after doing single Dad-dom in One Fine Day and playing a paediatrician on ER, “I’ll never have kids. I’m going to have a vasectomy.”

Rocker Ozzy Osbourne had the cut – and then had it reversed when wife Sharon said she wanted more kids.

And actress Audrey Hepburn broke up with William Holden after he had a $75 vasectomy so she’d stop harping on about getting married and having kids. Although she’d been entranced with his quiet charm and “Golden Boy” good looks, she decided “no babies, no Bill,” and married Mel Ferrer instead.

John Key’s admission that he’d had a vasectomy in a press conference in Wellington after he’d been asked a question about child care was picked up by more than 100 newspapers around the world.

The New Zealand Herald reports print media from as far afield as South Africa, India and the United Arab Emirates ran articles about the post-Cabinet Beehive press conference where the Prime Minister let it slip that he had had a vasectomy.

Britain’s Daily Mail reported that Mr Key was actually able to silence a room full of press with the admission. “Moved to wince”, said the headline in the Sydney Morning Herald.

Mr Key had been fielding questions on whether parents facing price increases at early childhood centres would still be better off from changes in the Budget.

When pressed about what he’d do if he had another child, he admitted: “I’d be extremely worried because I’ve had a vasectomy.”

Although it stunned most reporters at the conference, one recovered sufficiently to ask: “Did it hurt?”

Another reporter then wanted to know if it was a budget cut.

“All I can say is it’s been highly successful, but anyway we won’t get into that either,” Mr Key said.

William Holden (who was married and had two children) recalled his troubled romance with Hepburn in a biography.

“Audrey was 11 years younger than me. She kept asking me to settle down, talking of the babies we could have together. The constant talk of marriage and babies was getting on my nerves, I went out and got a vasectomy — I was half-drunk at the time.
I did it to shut her up talking about babies.

“Audrey was shocked. She broke down and cried and our romance crashed. Audrey left me. About a year later, I was at a dinner party with Ardis (his wife) when Audrey announced her intention of marrying Mel Ferrer.
“I was filled with a jealous rage. I got the studio to send me on a round-the-world promotion tour. Trying to get her out of my system, I made love to dozens of women in many countries.

“When I came back, I told Audrey about my rampage. She sneered, ‘I suppose you were drunk most of the time’. I felt terribly ashamed and had to nod agreement.”

Years later Holden died alone in his apartment after having fallen while drinking heavily and cutting his head. He lay bleeding on the floor, probably lapsing in and out of consciousness, and died without summoning help.