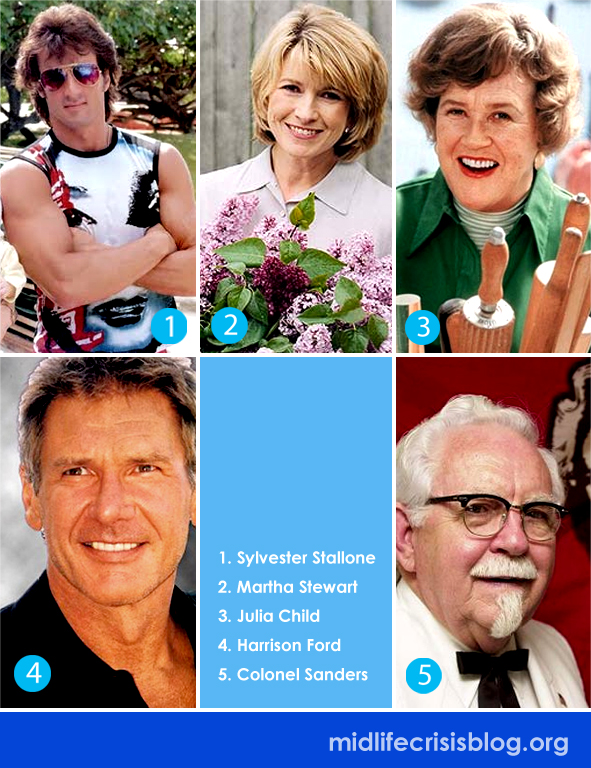 If you’d like to live by the motto that you it’s never too late to change, you’ll feel comforted by a fun blog on 11 Points which lists “11 Famous People Who Were in the Completely Wrong Career at Age 30.”

Did you know for example, that at age 30, Sylvester Stallone was a deli counter attendant, Martha Stewart was a stockbroker, and Julia Child was a government spy.

Highlights of the List (because Top Ten Lists are for Cowards):

1. Sylvester Stallone, deli counter attendant. After getting no career traction as an actor in his 20s, Stallone attacked his 30s like any 5’3 man should: He wrote a movie where he was an all-American hero with unbelievable success in sports.

That movie was “Rocky”… he banged out the “Rocky” screenplay in three days, in between working at a deli counter and as a movie theater usher… and it launched his career with an Academy Award for Best Picture.

2.  Martha Stewart, stockbroker. When she was 30, Martha Stewart was a stockbroker. Two years later she and her husband purchased a beat-down farmhouse in Connecticut… she led the restoration… transitioned into a domestic lifestyle… and parlayed that into her career.

3.  Julia Child, government spy. At age 30, Child wasn’t cooking… she was working for the U.S. government as a spy. She went on clandestine missions to China and Sri Lanka (which, at the time, was called Ceylon) to get intelligence documents to agents in the field. She didn’t enter cooking school until age 36.

4. Harrison Ford, carpenter. When Ford was 30, he starred in “American Graffiti”… which was a huge hit. But he got paid a pittance for acting in it, decided he was never going to make it as an actor, and quit the business to get back into the more financially dependable world of construction.

Four years later, he met up with George Lucas again (for those who don’t know, Lucas directed “Graffiti”) and Lucas cast him as Han Solo.

5. Colonel Sanders, tons of blue collar jobs. When Harland Sanders was turning 30  he was still  switching from one career to another:  Steamboat pilot, insurance salesman, farmer, railroad fireman. He didn’t start cooking chicken until he was 40 and didn’t start franchising until age 65.

It just shows it’s never too late to discover your true passion and go for it.