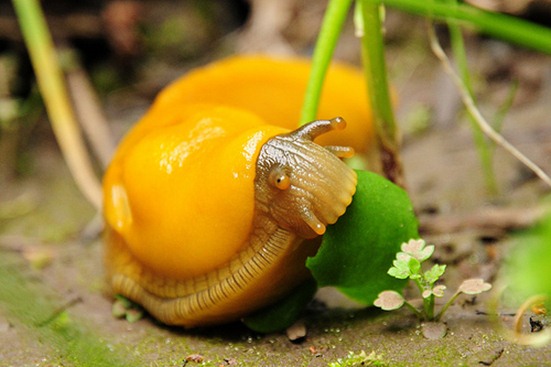 Consider the fate of the impressively-endowed Banana Slug, and maybe think again!

Banana Slugs: Male Organs as Long as Themselves!

The Banana Slug, scientific name Ariolimax Dolichophallus (which basically means really long penis), possesses male genitalia that can be as large as their entire body length!

Studies show men are typically more concerned about their penis size than women are. The Banana Slug’s impressive endowment may seem like a real boon to some, especially those facing the pressures and insecurities of the modern dating scene.

Look a little closer at the Banana Slug’s love life though, and you might reconsider!

Technically hermaphrodites, when Banana Slugs mate, they start the ball rolling by weaving together into a heart-shaped position and nibbling each other’s bodies.

And then both their oversized penises burst out of holes in their heads. Yes, you heard that right.

They spend the next few hours exchanging sperm, the end result of which is a clutch of up to 75 translucent eggs. At this point the slugs retract their sex organs. Or try to, at least—Banana Slugs possessing particularly large genitals usually wind up getting them stuck (somehow!), at which point their love-mate charitably assists its stricken partner by literally chewing its penis off.

Perhaps bear that in mind next time you get spam email promising to add inches to your love muscle! Sometimes it seems at least, big really isn’t better…

What are your views? Do men over-worry about the size of their personal organs? Is it really the size of the boat, or more the motion of the ocean? Or is it both? Share your perspectives with us!