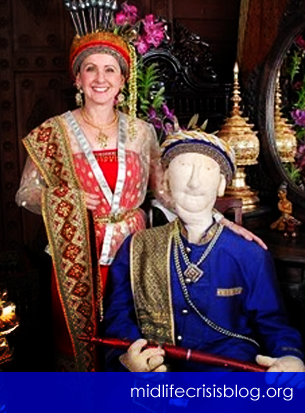 Melbourne artist Jane Korman celebrates the sheer joy of living and the tenacity of the human spirit in a series of videos in which three generations of her family dance to the Gloria Gaynor song I Will Survive at Auschwitz and other concentration camps and memorials throughout Europe.

(Links to this song are regularly removed so if this link doesn’t work search in YouTube on I Will Survive Auschwitz for an alternative.)

As Jane explains, she, her father, a Holocaust survivor, and his grandchildren recorded the dancing on a June 2009 trip to Poland to retrace her parents’ past.

In a second complementary video, on a cattle wagon at Radagost Station in Lodz, my father experiences flashbacks.

He reenacts the memory of his three-day journey in a similar cattle wagon, heading to Auschwitz, 65 years earlier, and appears to enter a trancelike state. In his native tongue, he carries on an improvised dialogue with the peasants he passed on the way.

And in a third clip, recorded  to Leonard Cohen’s Dance Me To The End of Love in a forest outside of Melbourne, Jane as a little girl, with her parents and other family friends dance with natural joy at being alive.

Says Jane:  “Growing up, I was always present while my parents danced. As an adult, it seemed a natural process to merge the two influences that have shaped my life that of my parents’ story and that of dance hence the project, Dancing Auschwitz.”

The whole project is a great commentary on gentleness and tenacity of the human spirit. Take a look! It’s worth musing on.