Cycling is a great form of exercise: low joint impact, high cardiovascular benefit. Plus it tones legs like nobody’s business.

But what good is that if your love life’s all dried up as a result? 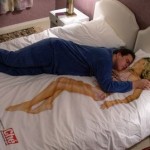 If only I had a real woman to appreciate my super-toned thigh muscles.

There’s been much debate over this subject recently. Can too much time spent on a bike seat really cause genital numbness in men, even erectile dysfunction? Strong opinions exist on both sides, with the most outspoken cycle critic, Boston urologist Dr Irwin Goldstein, quoted as saying:

“There are only two types of male cyclists – those who are impotent and those who will be impotent.”

Evidence suggests this is probably an exaggeration however.  A Norwegian survey found that while some endurance cyclists did indeed experience penile numbness or erectile dysfunction, these reactions were only temporary. Their sex lives were soon back on track!

A study put out by Yale in March this year investigated the effects of cycling on women’s sex lives too. It found that female cyclists, if they rode bike seats higher than their handlebars, were experience significantly increased perineum saddle pressure.

The good news for women though is at least there’s an easy fix:  raise the handlebar height or lower the seat! 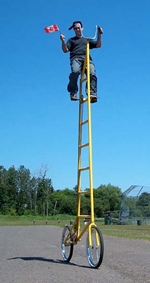 Not pictured: doing it right

The Seat of your Problems?

For men the bike seat may be the major issue too.  Saddles that are too high or low, not hard and flat enough, or in other ways exert too much pressure on the perineal area will increase the chances of numbness. It’s also important that a cyclist sit correctly and not put all their weight on the saddle as they would a normal seat, instead distributing body weight more evenly over handlebars and pedals as well. That is, only if you want your sex life unimpeded!

A new study has also shown that specially designed no-nose bike saddles produce much less contact pressure on the perineal region, and a two-thirds decrease in the number of men reporting genital numbness.  Which can only  be a good thing. 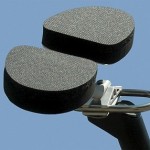 What do you think? Does high-intensity cycling really kill your sex life, or does it come down to technique and correct saddle-fit?  Or is it a risk just not worth taking?