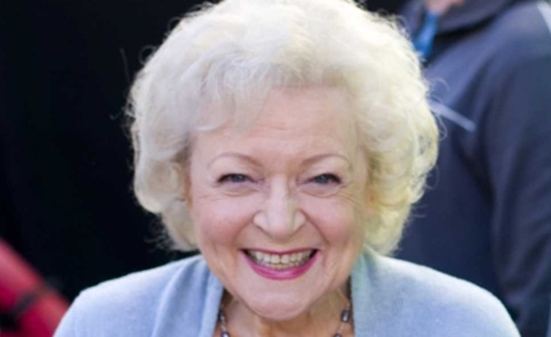 It was my 18-year-old grand-daughter who alerted me to a Betty White quote making the rounds on Facebook. She loved it enough to be able quote it verbatim:

Says Betty: “Why do people say “grow some balls”? Balls are weak and sensitive. If you wanna be tough, grow a vagina. Those things can take a pounding”

Yes, coming up 90 next week, the busy feisty actress is still sparking on all cylinders.  Not that she is overly impressed with the milestone birthday (which will feature in an NBC special January 16.)

“Everybody is celebrating it for me,” she told the Hitflix blog.  “And they’re all saying, ‘Oh my goodness! You’re 90!’ And I keep trying to explain, ‘Don’t give me any credit. I didn’t do anything to get to be 90. It just happened. I didn’t accomplish anything. It just came up on me.’

While she won’t be running a 10k to celebrate, she did admit, “I might go out and have a little vodka on the rocks.”

Her latest role is executive producing and fronting a hidden-camera show Off Their Rockers, featuring elderly people pranking the young.

She sees it as a bit of reverse psychology – the oldies getting back at yoof, but she’s determined it won’t be mean-spirited.

“My only functionality in the production is to be sure it’s not mean-spirited,” she said. “Things aren’t funny if it’s mean-spirited.

She also quipped about her new show’s take on sex in the golden years. When asked why senior sex is so funny, she said, “Look at yourself. If you had a sense of humor you would laugh to beat the band.

“Sex is pretty funny, let’s face it. And the more seriously we take ourselves, the funnier sex gets, I think.”