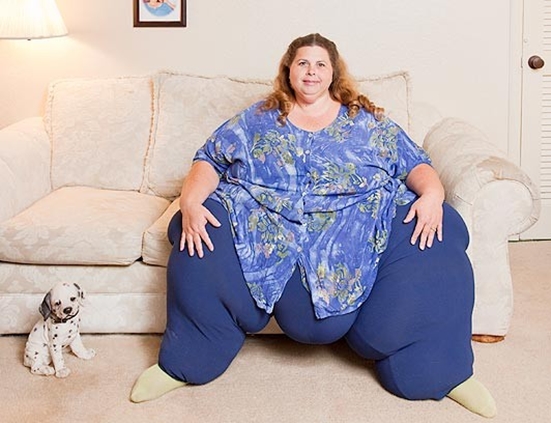 Sex. Lots and lots of Sex.

During an interview with UK magazine Closer, Pauline disclosed that ‘marathon sex sessions’ have helped her lose a whopping 45KG (98 pounds).

Following a split-up with her husband Alex in 2008, Pauline says she reacted by seeking comfort from high calorie foods. Her subsequent weight gain depressed her further and worsened her eating habits, so she decided to contact Guinness in hope that the shame of earning the title of world’s heaviest woman would motivate her to lose weight.

Instead though, it drew the attention of her ex-husband. The couple say the instant they met back up that old romantic spark re-ignited.

Pauline and Alex report having sex up to seven times a day, citing this as the main factor behind her huge weight loss.

And while at 140 pounds, Alex weighs less than one of her legs, he told UK’s The Sun that with some clever positioning and him doing most of the bedroom work, the weight issue doesn’t really put a damper on the couple’s love life.

Although as he told the paper, there is a very real risk of their bed collapsing and the impact seriously injuring one or both of them.

What’s your take on the whole deal? If Pauline and Alex can maintain such an active love life, and reap the health benefits, does anyone really have an excuse for ‘opting-out’?