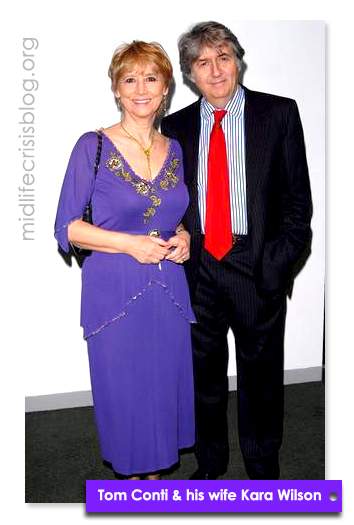 There are worse things than being unfaithful, according to movie Lothario Tom Conti in an interview with the Times in which he says sex is nothing more than “an extension of a handshake”.

The Scottish star of  Shirley Valentine who is rumoured to have had an affair with Diana, Princess of Wales, said he believed that of all the things people could do to one another, sexual infidelity was “probably one of the least terrible”.

Conti (68) who has been married to Kara Wilson, an actress, for 42 years, says it’s “all about degrees. Of course, if you upset the whole applecart that’s a different story.”

Conti and his wife are said by actress daughter Nina to have an open marriage in which both have had a string of affairs, and Conti finds some people’s sensitivity to the idea puzzling.

“The slightest sniff of infidelity and they are reaching for the lawyer,” he said. “I remember a very famous actor with whom I was friendly who, when he was in his seventies, married a girl of 23.

“He came home unexpectedly one day and she was under the decorator. He phoned me to tell me he was getting divorced. I said ‘the girl is 23. You are 70. You can’t satisfy her every night. Do you want her to live like a nun? Why don’t you just close your eyes to it?’

“He said he would always worry that she was being unfaithful. I said ‘so worry a little’. But they divorced. It was very stupid. It cost him millions and the woman he is now married to is an absolute bloody nightmare.”

The Player and the Princess

In 2003 it was speculated that Conti had had an affair with Diana after Paul Burrell, her former butler, revealed in his memoirs she’d been involved in a relationship with an unnamed actor. The pair were known to have enjoyed a string of lunch dates and Conti attended her funeral in 1997 but has refused to discuss their relationship further.

“She was delightful, she was lovely,” he said. “It was so sad for the boys because they were such children. A child losing his mother is vulnerable beyond description.”

He said the secret of his long marriage was “tolerance on both sides” and denied suggestions that his real life mirrored that of the men he has portrayed on screen.

Do you agree with Conti’s cool assessment of the dangers of adultery? Have you been betrayed and hurt by it? Or do you agree with his “turn a blind eye and tolerate it” approach. Share your views – we’d love to hear what you think.