25 Years After When Harry Met Sally

The much-loved rom com When Harry Met Sally – coming up for its 25th anniversary on July 14 – only ever won one award – and that was a Bafta for Nora Ephron for Best Screenplay.

But director Rob Reiner’s question – “Can two friends sleep together and still love each other in the morning?” – provided the hook for a warm and witty classic that has earned its place on “favourite movie” lists ever since.

The famous fake orgasm scene at New York’s Katz Deli was – at the time – one of the riskiest scenes on celluloid.

It’s occasionally been recreated by individuals over the years, but in November Improv Everywhere — known for staging flash mobs nationwide — surprised diners and Katz’s staff alike by re-enacting the Katz fake orgasm scene with more than 20 women taking part.

In the movie, the punch line to that fake orgasm scene, “I’ll have what she’s having,” delivered by Rob Reiner’s mother Estelle, has gone down in movie history as No 33 in the line up of 100 best movie lines of all time behind classics like:

“Frankly my dear I don’t give a damn,” Clark Gable in Gone With the Wind

“Toto I’ve a feeling we’re not in Kansas anymore,” Judy Garland, in The Wizard of Oz,

And “Here’s looking at you kid,” Humphrey Bogart in Casablanca

Reiner later related an epilogue to the New York Times, that after the scene was shot, his mother told him a story from many years ago, about a friend of hers who had just begun seeing the man she was eventually to marry.

”They had sex, and she faked an orgasm, and she was all upset,” Mr. Reiner says. ”And I asked why. And my mother said, ‘Because she made him think that’s the way it was. Then she had to do it every time.’ ”

Reiner has related how he had to coach Meg Ryan in the fake-it scene because the first three or four takes were unconvincing and weak. In this interview at an American Film Institute evening Reiner and Billy Crystal reminisce about “that scene.”

In the movie various couples are interviewed about how they met. Although actors are used in these interviews, all of the stories and situations they relate are real life histories. Coincidentally Reiner met his wife Michelle Singer on the set married her the same year and celebrated his 25th anniversary a few months ahead of the movie. 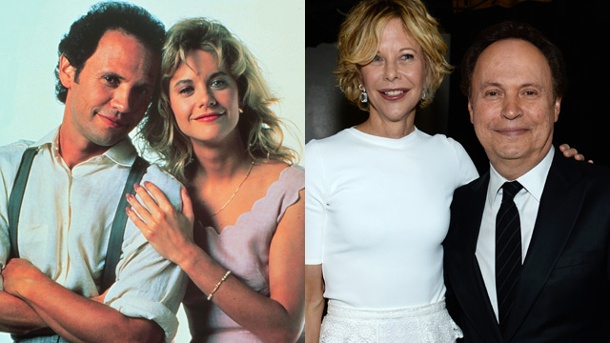